I am writing this on my phone while behind me children play. In a place of much joy and yet sadness.

I am in a shopping mall.

You could say it is like any other shopping mall – it has shops, restaurants, supermarkets and a play area.

We are here for lunch, the mall is crowded and many are here buying stuff for Shabbat.

It was busy erev Shabbat 10 months ago, that fateful day in September.

As we eat our lunch at a pizza store, I cannot help but look at the falafel place next to us – there is a poster on the storefront – it is of a smiling young man with a large Israeli flag behind him and words that say ‘Thanks Ari for saving my life – 16/9/18’. 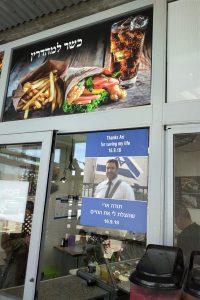 Yes, this is the mall where Ari Fuld was stabbed by a terrorist and in his dying moments, he made sure that the terrorist would take no more lives that day and shot him before he could stab the owner of the falafel store.

We came today to Gush to view the moving and powerful presentation at the Gush Etzion Heritage Centre which tells in a very impressive way the story of the rise, fall and ultimate rise of Gush Etzion.

However, as they said in the narrative, it is a very different thing to die defending Israel as warriors than to be murdered as sheep to the slaughter in Poland.

Ari Fuld symbolised, like the early Gush Etzion pioneers – a new type of Jew. Jews who would defend the Land of Israel with every fibre of their being while at the same time devote their lives to the Torah of Israel.

The fighters of Gush Etzion, Ari Fuld and the current residents of the Gush realised that a return to our land and our independence did not mean a rejection of the Torah. Conversely, they realised that an observance of Torah did not preclude them from building Israeli society and serving in the army.

The story of the fall of Gush Etzion in 1948, the day before independence is one of sadness but one of pride. The residents of the Gush, who became soldiers, were not thinking of themselves but of the bigger picture, defending Jerusalem from the enemy. Many times they extoll each other with the words ‘Chazak v Ematz’ – have strength and courage. They certainly did.

In the Parsha, we see the choice of Yehoshua to succeed Moshe Rabbenu. Yehoshua is the leader that takes us to Israel, the original pioneer that began the creation of the 1st commonwealth, which lasted for almost 500 years. In 1948 we proudly began the third commonwealth.

In just the first few pasukim of Sefer Yehoshua we see Hashem three times commanding him to be ‘chazak v ematz’ in the upcoming task ahead of the conquest of the Land of Israel.

‘Be strong and have courage; for you will cause this nation to inherit the land that I have sworn to their ancestors to give to them. Just be strong and very courageous to observe and do in accordance with all of the Torah that Moses My servant has commanded you……Did I not command you, be strong and have courage, do not fear and do not be dismayed, for the Lord your God is with you wherever you go’. (Yehoshua 1:6-9)

What is fascinating is that the three times Hashem mentions to Yehoshua to be strong and have courage they are in reference to three separate ideas, which reflect the values and the ideals of those pioneers of the Gush who fell as heroes in May 1948.

The first is to allow us to have strength and courage to inherit the land. You could say this is the classic Zionist ideal which empowered Herzl and the Zionist movement and of course the Gush Etzion pioneers.

The second mention however, stresses that the courage of inheriting the land must go hand in hand with the observance of Torah. Which as we said above was exactly the ideology of Gush Etzion.

The final one strengthens us not to lose hope, to never give up, to realise that Hashem is always with us even though at times it may seem to the contrary. Coming out of the Shoah, the Gush pioneers had every reason to give up hope, but they didn’t, they came, they built, they learnt, the observed and they fought.

We still long for that peace and will forever be inspired by those heroes who fought so that we would have our Land and our Torah.

Heroes with true strength and courage – heroes like the fighters of Gush Etzion and Ari Fuld.

We will never forget.