Discussing the Past, Present and Future

It was the strangest feeling.

Sitting at a table with Rabbi Sacks and Sivan Rahav Meir and looking into an ipad – and knowing that thousands of people around the world were watching us and sending in questions.

I of course speak about the discussion that I was honoured to facilitate between two global Jewish leaders. It was a fascinating hour listening to both of them and well worth watching. For me what was most interesting was that I asked the same questions to both of them and yet received completely different answers, not because they disagreed with each other, but because they addressed the question from different angles.

Rabbi Sacks spoke Torah as a master philosopher – analysing and explaining concepts in a powerful and meaningful way.

Sivan spoke Torah as a journalist and broadcaster – linking her ideas to the world around her in a refreshing and modern way. 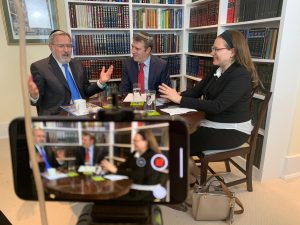 For one hour I was inspired with the realisation that so many of the world’s problems would be sorted if they would only realise that Hashem’s gift to the world was not just meant to show the Jewish people how to live but the concept contained therein has a message for the entire world –  which it desperately needs to hear.

What I find so worrying is that unlike Sivan and Rabbi Sacks, in our polarised world – the same words, or the same speech can be in two different publications both correct and good in one and horrendous and wrong in the other – the same exact speech or action – so polarised have we become both here and in the USA.

A few years ago in May 2016, just one month before the referendum, Rabbi Sacks was presented with the Templeton Prize.That night he highlighted the problem which has only got worse in the ensuing years – he blamed it on the fact that we have not imposed limits on outsourcing. It is one thing to outsource to make your business more efficient but you can’t outsource conscience. You can’t delegate moral responsibility away.

‘When you do, you raise expectations that cannot be met. And when, inevitably, they are not met, society becomes freighted with disappointment, anger, fear, resentment and blame. People start to take refuge in magical thinking, which today takes one of four forms: the far right, the far left, religious extremism and aggressive secularism. The far right seeks a return to a golden past that never was. The far left seeks a utopian future that will never be. Religious extremists believe you can bring salvation by terror. Aggressive secularists believe that if you get rid of religion there will be peace. These are all fantasies, and pursuing them will endanger the very foundations of freedom. Yet we have seen, even in mainstream British and American politics, forms of ugliness and irrationality I never thought I would see in my lifetime. We have seen on university campuses in Britain and America the abandonment of academic freedom in the name of the right not to be offended by being confronted by views with which I disagree. This is le trahison des clercs, the intellectual betrayal, of our time, and it is very dangerous indeed.’

Remarkably, in this paragraph Rabbi Sacks sums up the problem of the world today. As we approach Rosh Hashanah we have seen what 5779 has brought, can we look forward to 5780 with anything but dread? As the four extremes continue their inexorable march, we Jews, who sit in the middle, feel attacked from all four sides.

The answer is one I heard from a holocaust survivor about his experiences in the camps, ‘I don’t know why God put me here but it is my job to get on with being a Jew here as much as anywhere else, and with that attitude I was able to help many people’.

We cannot control the externals, what we can do is ‘get on with being a Jew’ wherever or whenever we find ourselves. With that attitude not only will we be a walking Kiddush Hashem but the collective impression that our nation could make if it woke up to its responsibilities would be immense.

And for the wider world, we have to hope and pray that they will wake up to the realisation that extremes are never the solution and if through the lives of Torah that we lead and the words of Torah personalities such as Rabbi Sacks and Sivan Rahav Meir can inspire that change, that will be so welcome.

I will leave you with my last message of 5779 with the words of Rabbi Sacks who beautifully expresses the hopes for humanity.

‘There is an alternative: to become inner-directed again. This means recovering the moral dimension that links our welfare to the welfare of others, making us collectively responsible for the common good. It means recovering the spiritual dimension that helps us tell the difference between the value of things and their price. We are more than consumers and voters; our dignity transcends what we earn and own. It means remembering that what’s important is not just satisfying our desires but also knowing which desires to satisfy. It means restraining ourselves in the present so that our children may have a viable future. It means reclaiming collective memory and identity so that society becomes less of a hotel and more of a home. In short, it means learning that there are some things we cannot or should not outsource, some responsibilities we cannot or should not delegate away.’

Wishing everyone a Shana Tova, thank you for all the kind comments we have received over the year and look forward to writing Machshavot next year in 5780.