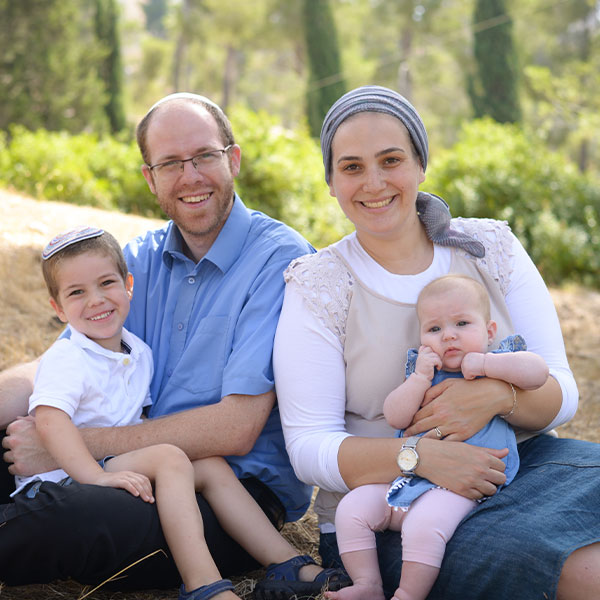 Rav Joel and Sarah Kenigsberg, along with their two children, are the Mizrachi shlichim in Hendon. They arrived in the UK from Jerusalem in September 2018, and currently serve as Rabbinic couple of Magen Avot, a vibrant community in Hendon, as well as Rabbinical shlichim of Bnei Akiva.

Rav Joel grew up in South Africa before making Aliyah and studying in Yeshivot for thirteen years. During this time he received his semicha from the Chief Rabbinate of Israel. At Yeshivat HaKotel, Rav Joel took part in the Hesder program of joint Yeshiva study and IDF service, he was also a shoel u’meishiv for the International students program. He then studied at Eretz Hemdah where he graduated from Manhigut Toranit – a five-year post-Semicha program developing Rabbinic leadership for communities around the world.

Rav Joel has a B.Ed from Lifshitz College of Education and a Master’s degree in Science and Halacha from Bar-Ilan University, both of which he completed with distinction. He takes a special interest in the interface of Halacha with the modern world and has written and presented extensively on this topic both locally and internationally, including at the recent Conference of European Rabbis in Antwerp.His articles have also featured in the acclaimed Tzurba m’Rabanan series.
Sarah grew up in Manchester and made Aliyah after studying for a year in Midreshet Orot. She holds a Masters Degree (Cum laude) in Pharmaceutical Chemistry from Bar-Ilan University and worked for several years as an organic chemist at Merck, a renowned multinational biotech company. Sarah is a certified kallah teacher and underwent extensive training in communal leadership through the Manhigut Toranit program. She also teaches informal Jewish education at Immanuel College.